It’s hard to even know where to begin with this post, we’ve been back for 3 weeks now and I still haven’t figured out how can we even begin to narrow down everything that happened while on the 2015 Explorer Belt Expedition.

I suppose a good place to start would be a map, so we’ve made out the following map to give people a look at our trip:

The overall route we took

Our drop off took place in a small town called Schwaneberg, not far outside Magdeburg. After an intersting journey (getting stuck for a route before we even started due to road closures and so forth) we were unloaded and given the infamous brown envelope containing all our instructions for the following ten days. We thought at the time this would be the last we would see of any of the sweep team, but at the time, it certainly felt a bit lonely.

We took out all the documents we were given, which included a map of the area, our food and supply budget of €75 in total for the ten days, the transport budget of €30, our check in time schedule as well as a letter of instruction to us and a letter of introduction in both German and English. We had to make a plan of our route and also had to go and look for food and fuel for our first night out. It was 2pm at this stage so there wasn’t really much time to hang around so we soon had a good idea of a route and made a plan to head for the closest town south of us, Egeln.

Writing this now, I already know there is no way I’m going to be able to write up a whole summary of the 10 days, there’s just too much to include and not enough time to write it all out now – I guess we have the logbooks as a record for that. 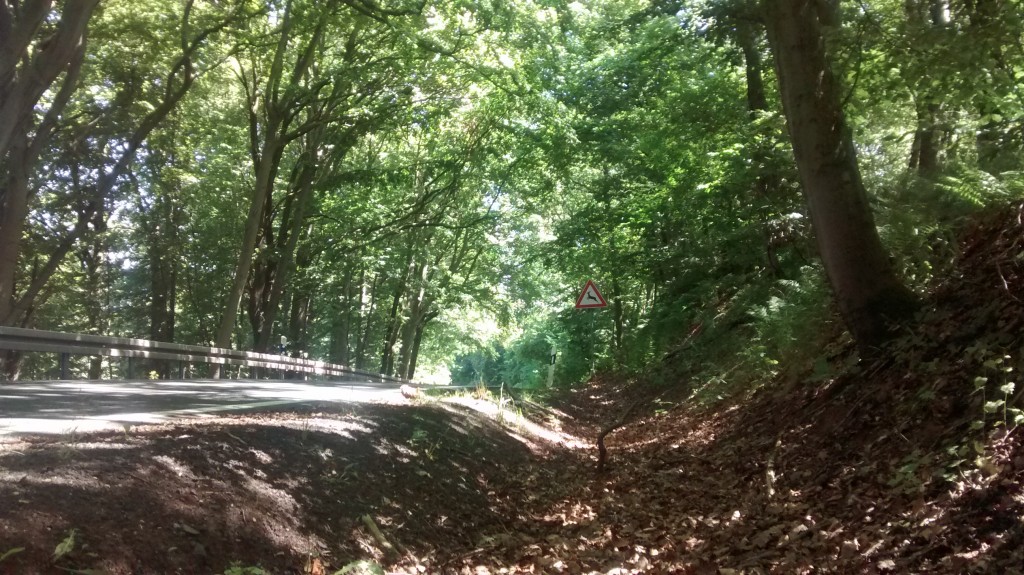 There are indeed some points which do need to be mentioned. While it’s fair to say that we spent most of our time walking over the ten days, we also met some fantastic people along the way, some of whom really went out of their way to help us. On day one, a man pulled up to us just after we finally acquired our petrol having seen us a few times during the day. He was the captain of the local biker club and was most helpful to us, setting us up with food, a place to stay and a hot shower on the first day! He was also a flight operator and mechanic for the police helicopter in the Sachsen Anhalt Region. He had many stories for us and spent the whole evening talking to us, and was really a most interesting start to the 10 days. He also had a lovely vintage car (we would have gotten a spin but we had to walk..)

Day two saw us staying with a young family who had built their own eco house with their own geo thermal heating and on day three we met our first German scout! We stayed with a student from the south of Germany in Wernigrode on the edge of the Harz mountains and he shared a lot with us about the German scout scene, which is really quite different to the Irish system. They have many different scout associations, 3 of which are associated with WOSM. He was from the BDP, the largest of the German associations and we discussed the differences in the systems for the night. It was also a student house so we also managed to learn something about German student life while there.

Day four saw us stay with a young family with a baby girl in Braunlage and on day five we stayed with an orthopaedic surgeon who was called away mid way through the evening to do an emergency operation in the next town over! 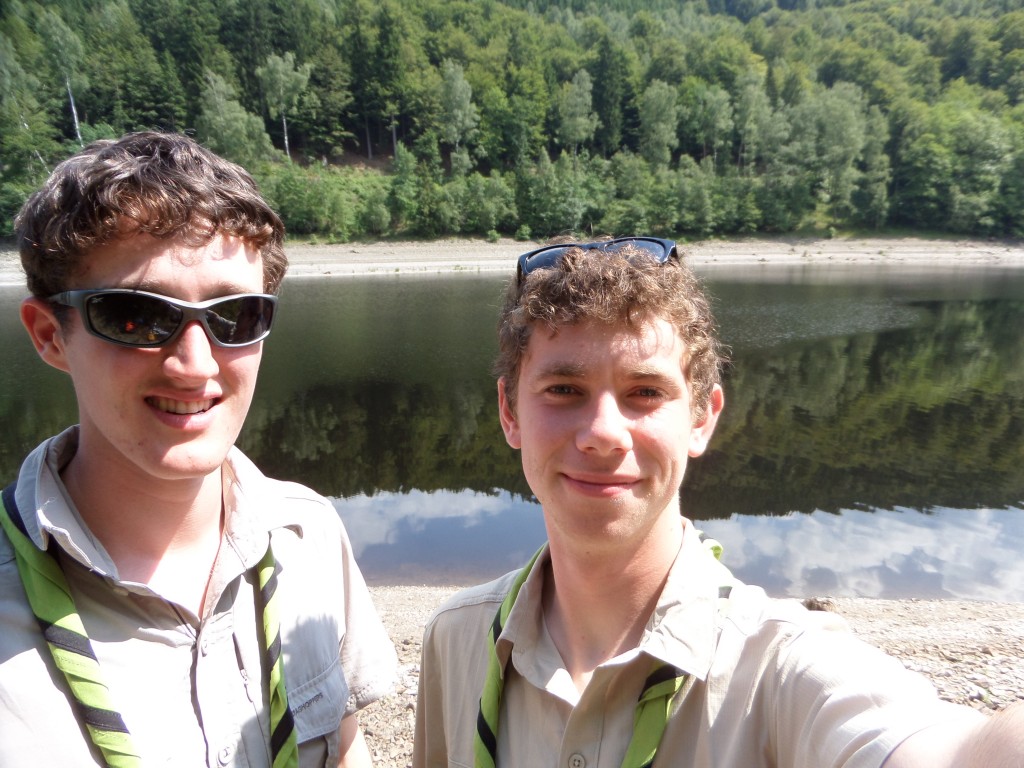 On day six we met a lovely family in Duderstadt and were given a most delicious dinner after a tough days walking (the heat was getting worse). We spent the evening talking to them and had a nice conversation about many different things about Germany and the life there. It was definitely one of the best nights we had on the trip.

On day 7, we met a scout leader in Heilbad Heiligenstadt who we found through an address given to us in Duderstadt. He was from a different scout association, the Royal Rangers, who were a non WOSM association. We camped in the grounds of their local meeting place that night and we got some badges to add to our collections. The heat was really getting bad at this stage as the whole of Europe was being hit by a heat wave, so we had to deal with temperatures of 35 to 40 degrees some days which was well out of our comfort zone..

On day 8, we had our accommodation sorted ahead of us. Throughout our time in Germany, our Facebook page was getting quite a bit of attention from those in Germany and we got many offers of places to stay for our trip. While most of these offers didn’t work out, we managed to sort a night a few days in advance in Witzenhausen so we planned our route in accordance with this. It really was fantastic to start off in the morning knowing we would have somewhere to stay that night. This was another student house and the girl who lived there and her friend who was visiting were also members of the BDP. We spent another great evening there.

It was hard to get going again on the morning of day 9 but with the end in sight and a shower of rain to keep us cool refreshed, we set off once more. We stayed in Hann Munden that night and were offered a spin out on the river there in a beautiful wooden canoe. Despite the logs we still had to finish, we couldn’t turn down the opportunity! It really was quite worth it though as the paddle a dip in the rover afterwards was very refreshing in the heat. How we managed to end up staying outside the canoe club was really a matter of luck in fact. The girl we stayed with the night before had rang ahead to Hann Munden. One of the people she rang worked in the Scout centre in Immenhausen in fact but he didn’t have a garden for us to sleep in as he lived in an apartment. However, later that day, he happened to see us sitting outside the church in the town as I tended to my feet and Fionn was falling asleep beside me. He approached us then, told us about the call and said that he actually had a place for us to sleep outside the canoe club where he was a member. It was quite the coincidence!

On Day ten, we finally arrived at Immenhausen, which was a terrific mental and physical relief. The feet were really quite sore at this stage as the road walking had taken a surprising toll on us and my feet in particular were pretty bad getting to Immenhausen. However, the cultural experience and meeting all the people along the way really made up and out weighed all the bad points. All the people we met along the way were so friendly and welcoming to us and enabled us to learn so much about Germany and the life over there. If the hardest part of the expedition was the walking (the heat only made this worse however), the better part of meeting everyone along the way made it well worth our while! 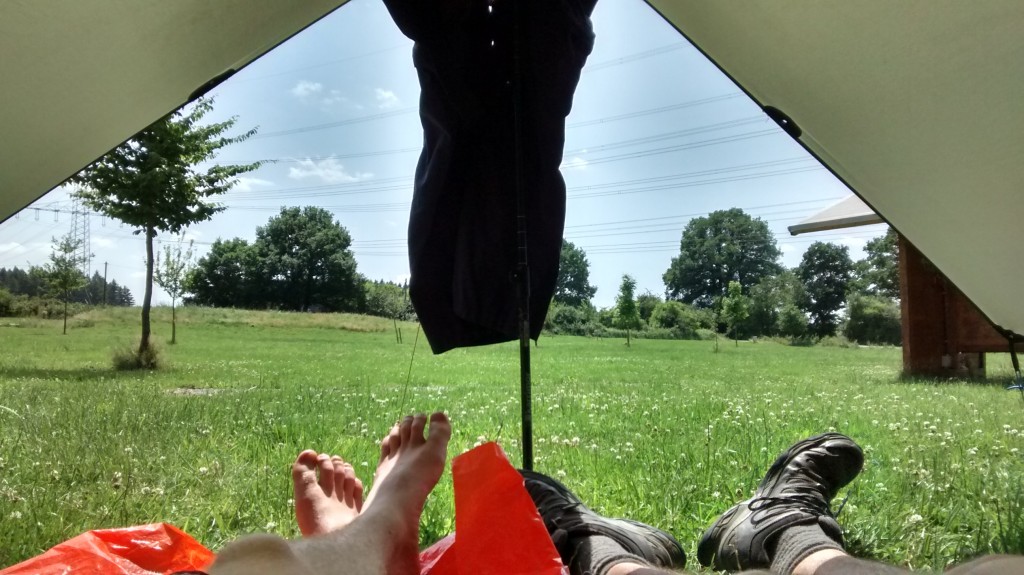 While the above is only a brief summary of the people we met and doesn’t even touch on everything that happened to us, we do hope we will be able to elaborate with those of you reading this. We will be doing some talks and presentation on the Belt in Galway come September and the new scout year so keep an eye out for news on those. We’ll have the full logs and maps and all sorts of tales to tell!

For now though, that’s it from Team Tarp, although we do hope to have some post up soon about all the gear we brought, particularly with some notes and thoughts about using the tarp.